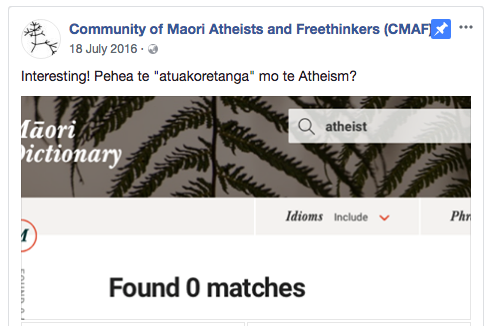 In the 2013 census 46% of Māori said they had no religion. However, Eru Hiko-Tahuri, who blogs and writes under the name The Heretical Hori states that ‘there are very few Māori who would admit to being atheist”.

Eru Hiko-Tahuri, and founder of Māori Atheists and Freethinkers Te Henare, will talk about about being atheists, letting go of superstition, and navigating the Māori world where almost everything is permeated with notions of spirituality and religion.

They’ll provide their unique insights into the tension between culture and religion in a post-colonial New Zealand. And will discuss the anger, fear, and daily micro-aggression they experience for their beliefs.